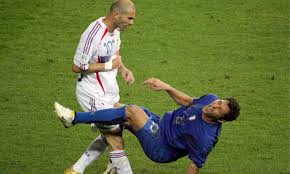 One of the true superstars in the world sport of soccer, Zinedine Zidane’s technical artistry carried France to its first World Cup in 1998; and almost again in 2006 until his red card due to a deliberate head-butt in overtime became a cultural phenomenon over-shadowing France’s eventual loss to Italy by penalty-kicks.

George Bellow’s painting of the 1923 Heavyweight Championship brawl between Jack Dempsey and Luis Firpo becomes one of America’s most iconic sports images.

Join Doc and host Danielle Orr for for their monthly feature on Latin and Central American athletes, popular culture and politics.  This new feature is an outgrowth of Doc’s 12-part series on Latino athletes for the El Sol Bilingue Newspaper.

Argentinian Luis “Wild Bull of the Pampas” Firpo was the first Hispanic to fight for the heavyweight championship on September 14, 1923 at the Polo Grounds in New York City.  Firpo had a knack for self-promotion.   He marketed his fights in the United States via the fledgling medium of film and became a celebrity in his home country of Argentina as his countrymen flocked to see movies of his stateside bouts.   He then became the centerpiece of America’s most famous sports painting (Dempsey and Firpo, 1924) by American painter George Bellows.  The fight, one of the greatest  of the 20th century was also one of the first championship matches to be broadcast live on another burgeoning medium – radio.  Firpo lost the championship fight but ultimately returned to Argentina and became a millionaire, his legacy in American and Argentinian popular culture forever immortalized.

Tune in and listen to the show or stream it at:

Wily Argentinian fighter in the 1920’s is the first Hispanic to fight for the heavyweight championship and becomes the centerpiece of America’s most famous sports painting in one of the greatest fights of the 20th century.

To stream Doc’s piece, go the PRX link below: